Our tour ended in Amsterdam.  We had a half-day city tour, and then our guide gave us ideas of other things to do.  When he mentioned the Museum of Bags and Purses, there were lots of chuckles among our group.  I, on the other hand, was thrilled!  I had heard about the museum, but I hadn't realized it was in Amsterdam.  Wow!  I could hardly wait! 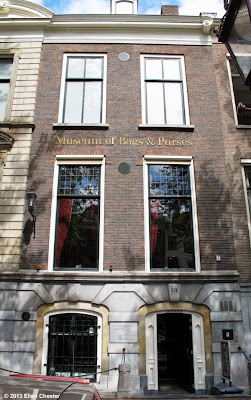 The museum is in a canal house built in 1666.  Inside are over 4000 bags, purses, cases, and accessories dating from the Middle Ages to the present.

Tom was sweet enough to photograph all the pieces I requested.  As is often the case, the museum lighting was not conducive to photography, and there was also the issue of the glass display cases.  I was just thrilled that they allowed photos albeit without flash.  I've gone through our photos and am limiting my blog posts (yes, another one coming soon) to 52  images.

As explained on one of the museum signs, bags have long been useful for both women and men to carry documents and personal items.  Centuries ago, clothing had no pockets, so some kind of bag was necessary to carry the items.  Except for briefcases, men quit using personal bags during the 17th century when their clothing began having pockets.

The following bags date from the 17th and 18th centuries.  As you can see, a wide variety of shapes, and materials were used. 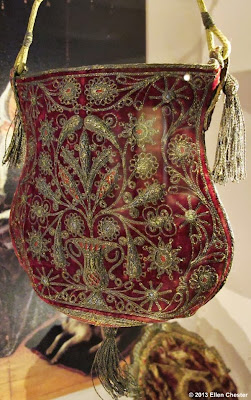 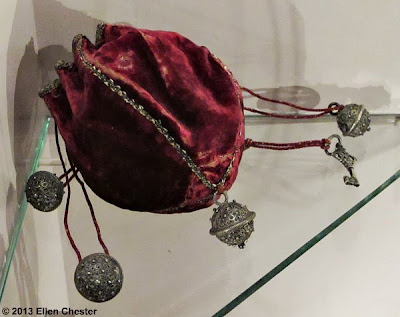 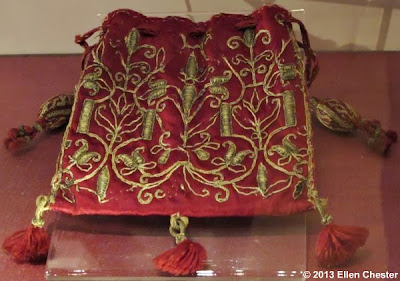 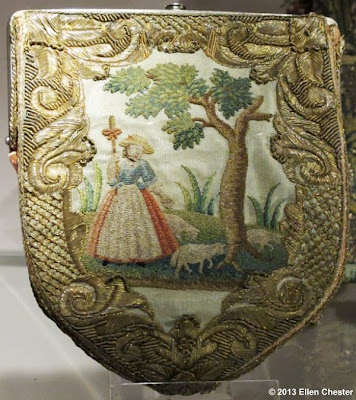 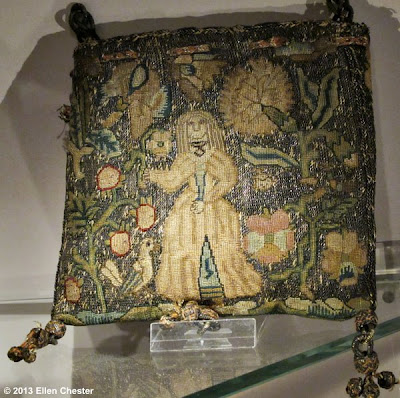 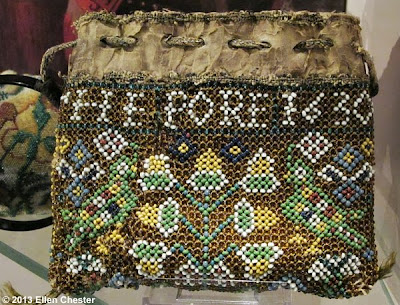 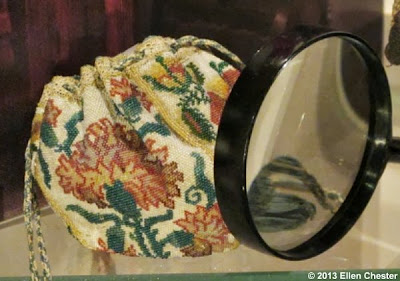 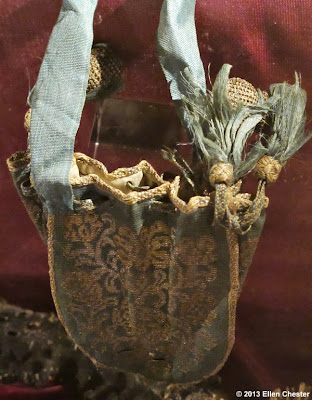 The following bag is a gaming purse.  During the 16th-18th centuries, games of chance were a popular leisure-time activity in European courts.  The bags had a stiff base so that they could stand up on a table. The player would keep his or her money or gaming chips in the purse.  This one was my favorite. 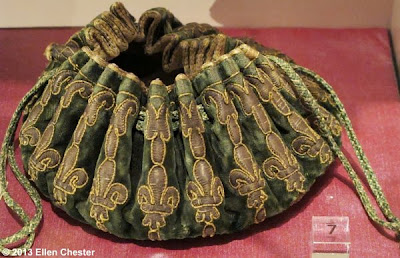 During the 17th century, a wallet or letter case was used to hold letters and documents.  Purses and pouches were used to hold coins. The wallets and letter cases were often made out of leather, glass beads, straw, or silk.  The silk ones were often embroidered with silk or metal threads.  The cases shown in the following photos show a wide variety of techniques and materials. 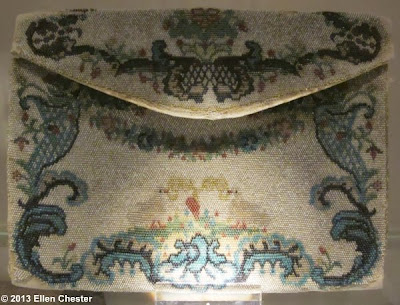 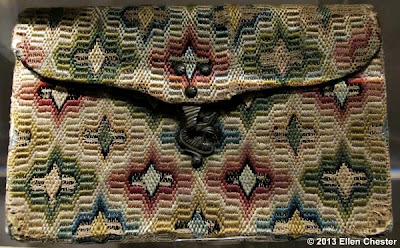 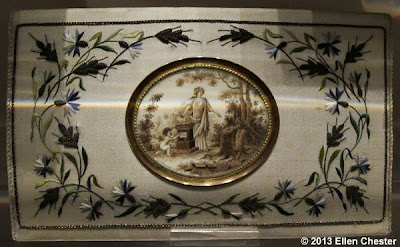 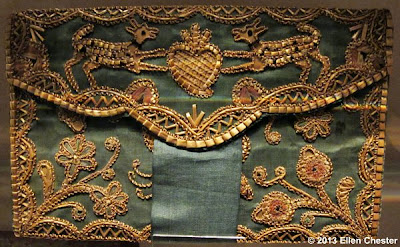 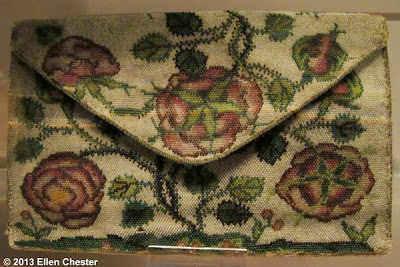 From the 17th century through a large part of the 19th century, women's clothing didn't have pockets, so women often wore large tie-on pockets over their petticoats and under their dresses or skirts.  The dresses and skirts had large slits on the sides so that women could reach into their pockets and retrieve what they wanted.  Some of the common items a woman would carry in her pockets were a purse, a letter case, sewing  supplies, a snuff box, and keys.  The three sets of pockets shown  in the next  two photos date from the early to mid-1700s. 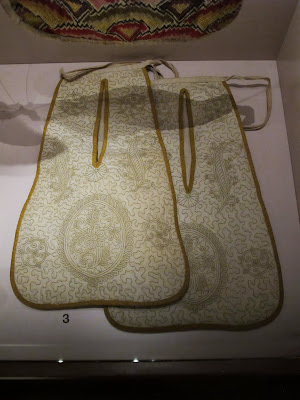 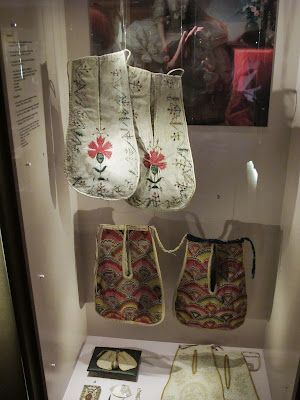 Did you catch a glimpse of the miniature pockets in the bottom left corner of the last photo?  With them is a pinball.

Below the pockets and pinball are a pair of scissors, a dance card, a perfume bottle, and an embroidered pocket "herbarium".  I've been unsuccessful in figuring out what a herbarium is.  The information I've found describes pressed dried plants.  Perhaps it is a place where a woman could put pressed flowers to keep as a remembrance.  If you know anything about herbariums, please let me know. 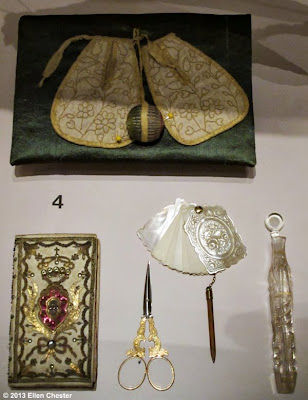 Next are some workbags.  Every "respectable" woman was expected to spend her free time doing fine needlework, so she needed a bag in which to keep her needlework and supplies.  Women would often take their workbags when visiting friends.  Next is a photo of one of my favorites. 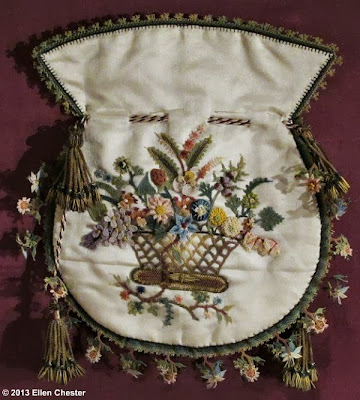 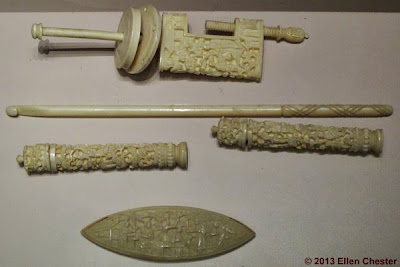 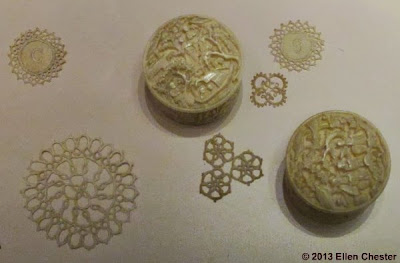 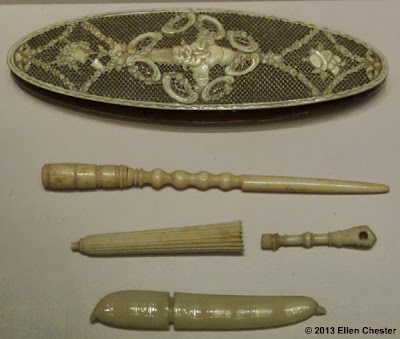 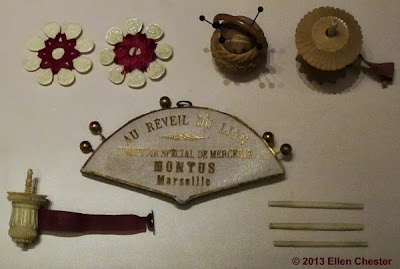 As clothing became more fitted, there was no longer room for tie-on pockets underneath.  The reticule, a forerunner to our modern-day handbag, was then developed.  Reticules were typically made from cloth and had a cord or chain which could be pulled to close the bag and also serve as a handle. 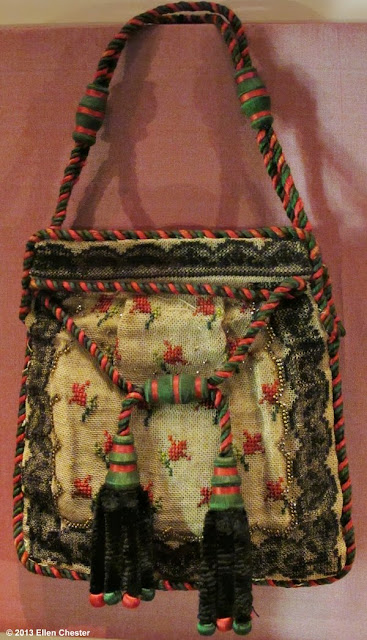 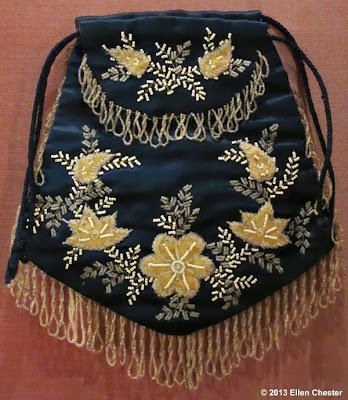 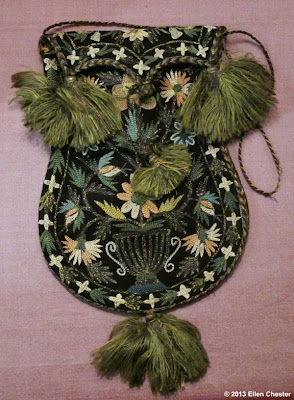 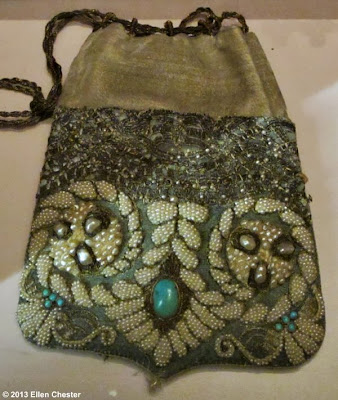 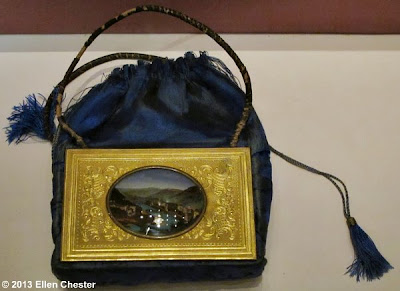 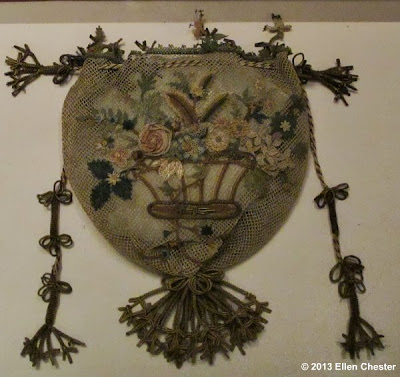 Stay tuned for my next blog post in which I'll show you some lovely beaded bags, beautiful chatelaines, and more!!
Posted by Ellen at 10:05 AM

Oh you lucky girl to have seen these in person -- just gorgeous!! Thanks for sharing.

Oh my goodness, these are beautiful! I love the ivory tools. Oh to have seen these in person.

Just loved this post, have learned so much....better than school! Can hardly wait for your next post.

Beautiful! Thank you for sharing. Nice to know that we all would have been considered respectable for doing fine needlework!!

Lovely pictures! An Herbarium can also be a book about medicinal plants which would have been very helpful then, and now:)
Angela

Oh my!! this is soooooo up my alley. Such incredible embroidery and bead work. Love all the history about the tie on pockets, haven't heard of these before. I am thinking that most ladies enjoyed going for walks, makes since that they would have created a pretty pocket to keep their findings of hearbs and have natural potpourri. And if they made it into a ball I think that was their pomander ball. Remember back then they didn't bath regularly. I've enjoyed every photo....this is my 4th visit reading this post:)love Annette
love Annette

Oh Ellen I am so happy to see your pictures, they are the best! Years ago I visited this fabulous museum and was then not allowed to take pictures. Did you see the hornbooks too?
Glad to hear your visit to Amsterdam was fabulous!
Hugs:))

Such beautiful pieces of work. I can see why you wanted to go to that museum. Your post was very informative. Thank you so much!

Beautiful! Can hardly wait to visit.
Thanks for sharing. I look forward to your next post!!

Thanks for posting the pics. These are so wonderful!

Wow wow!!! So amazing! I really loved seeing all these lovelies! I actually worked in an historic site at one point in my life, and we wore pockets under our aprons. :D Just simple unadorned ones. But I didn't know about them until that job. So cool! Thanks for the tour -- I can see why you got excited!

Thank you for visiting my blog! 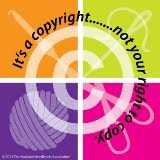 Please visit us also on the With My Needle FACEBOOK page.
Visit my website to see all my designs.
Please send photos of any of my designs you have stitched to me at examplar@withmyneedle.com.

The ideal photo size is 640 pixels in the largest dimension.

I don't always get notifications when a note is left in my guestbook, so if you have a question it is best to email me directly.

More details and photos of my teaching projects are at my website.